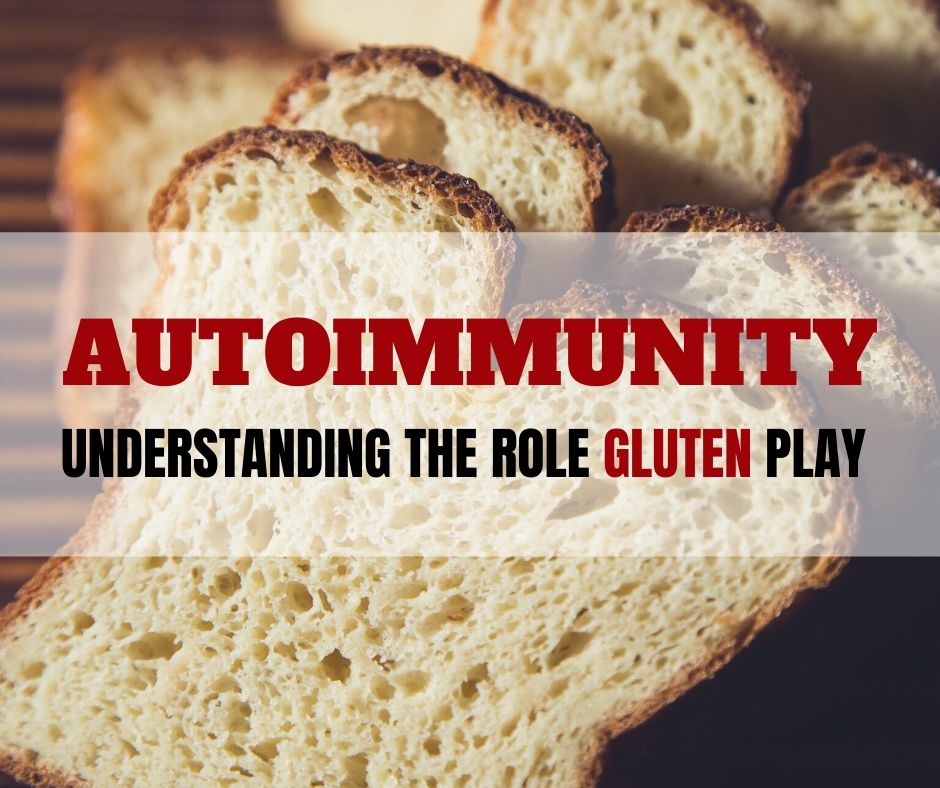 If you have an autoimmune condition, you want to feel better and reverse the progression of your disease. From a functional medicine perspective both these things are possible when you address the root causes of your condition — and it’s believed that gluten is one of the many possible root causes.

There’s a well-known link between gluten and autoimmune disease. Many functional medicine practitioners recommend that you follow a gluten-free lifestyle when you have an autoimmune condition.

In her book “The Autoimmune Solution”, leading autoimmune expert, Amy Myers MD states that gluten is poisoning you, not just in one way but in several.

So, why is gluten such a trouble maker?

In his landmark 2009 study, Alessio Fasano, MD, suggested that three things must be present for an autoimmune condition to develop: a genetic predisposition, a trigger, and a leaky gut. He further suggested that gluten directly triggers the release of zonulin, the molecule that breaks down the tight junctions (or the glue) that hold our intestinal lining together.

In other words, gluten causes a leaky gut. And a leaky gut creates the opportunity for the “trigger” like bacteria, toxins and undigested food to enter the bloodstream facilitating the development of autoimmune disease.

You have a food allergy when your immune system identifies what you eat as an invader, and reacts by producing antibodies to fight it. The most common immune reaction is called an IgE mediated immune response. IgE’s are allergic antibodies and cause an immediate, extreme and potentially life-threatening reaction. It can range from a mild reaction like hives or stomach cramps to a severe reaction, such as anaphylaxis, which can impair your breathing, cause a dramatic drop in blood pressure, and affect your heart rate. Due to the severity of food allergies, you likely already know whether or not you have one.

Food sensitivities or intolerances generally don’t trigger the dramatic or immediate reactions associated with food allergies, but they’re every bit as real, with varied symptoms like nausea, vomiting, respiratory problems, brain fogginess, and skin reactions such as eczema. It is more difficult to diagnose food sensitivities or intolerances because it triggers a different immune reaction called the IgG mediated immune response. IgG’s are antibodies that cause a delayed and less extreme reaction. It can also trigger a digestive reaction when your body can’t properly break down certain food. It could take up to 72 hours for symptoms of a food sensitivity to present. The problem with this delayed response is that it’s very difficult to identify the food causing the sensitivity as you probably eat a wide range of foods in the time it takes for symptoms to appear.

According to some statistics, 30% of the population are gluten sensitive. Some experts believe the number is higher.

Chronic inflammation plays a huge role in autoimmune conditions. Inflammation is caused by your immune system in response to a specific threat like gluten. The purpose of inflammation is to eliminate the threat and then to return back to normal when the threat is gone.

Reducing inflammation is your biggest weapon in recovery, but if you are sensitive to gluten, like most people, gluten will cause an immune response in your body that will fuel inflammation.

In other words, when gluten molecules leak through your gut into your bloodstream (as a result of leaky gut), your immune system may view them as foreign invaders and make antibodies to attack them. With Hashimoto’s disease, for example, those same antibodies get even more confused. Not only do they view gluten as a foreign invader but they also treat your thyroid tissue as if it were gluten.

Studies have found that antibodies to gliadin, the protein in gluten, react with several different body tissues like the thyroid, brain, nervous system and joints.

Many functional medicine practitioners have found that if you remove gluten from your diet, heal your gut and maintain a healthy lifestyle, you can prevent molecular mimicry.

Even a tiny amount of gluten can trigger those antibodies and launch an attack. So, if you are serious about recovering, you have to avoid gluten 100% of the time. Not 99%, but 100%.

The truth about Autoimmunity